(quote in title stolen from ‘Nothing’)

I feel extremely bad about having left Music in Notes without a post in over 2 months, but I have my reasons. TGTF’s lead-up to going out to Austin for South by Southwest (SXSW) took up a lot of my time and energy, as it necessitated weeks of preparation before we even set foot in Texas. I can hardly believe it, really, that it was my fourth time going. All the prep work paid off, as we saw more bands and interviewed more acts than ever while at the event. Post-Austin when I returned to DC, intensive writing, photo editing, correspondence, and whatnot commenced. But it’s all done now, all 153 SXSW 2015 articles – previews, pre-festival Q&As with bands, interviews, features, and festival day and evening round-ups – were submitted by the start of April to SXSW Music, and I can breathe again!

While all of this was going on, I developed a strange pain in my hip that stopped my usual exercise regime in its tracks. After 8 weeks’ plus of physical therapy, I’m in a lot better shape than I was and stronger, and I’m glad for that. I’m not the most relaxed person in the world anyway – I prefer being a busy bee and incredibly productive because my mind usually doesn’t stop thinking and dreaming, and when I’m forced to slow down or stop, I pine – so it was a reminder that I’m always a work in progress.

I came home one afternoon the week I started physio feeling physically shattered while emotionally crushed that I was, years later again, dealing with physical pain from an unknown cause. I flicked through some channels on tv before settling on what looked like a live performance on a German language channel. It was Irish pop band the Script, playing at some European club, probably around the same time I saw them myself the first time in DC 5 years ago. I was a very different person then. For one, when I saw them play, it had been a few days after I’d gotten my heart broken badly, and really, no one else could have done in the moment but them. Needless to say, ‘Breakeven’ was a mainstay of my playlist for the weeks and months after, as I tried to figure how the hell we’d gone wrong, crying my eyes out as I poked at the bass notes of the song on my guitar.

And then I looked at the time and date on the channel guide on my tv. Is it really Valentine’s week again? Oh no. Just no. Not another Valentine’s Day alone… I don’t do lonely very well.

I have a draft for my analysis of ‘Breakeven’ sat in WordPress this very minute, but I never got around to finishing it, as I was too preoccupied in my melancholy at the time. I might complete it in the future, but I’m not holding my breath. It seemed as soon as our SXSW 2015 coverage was finished, I was asked to contribute preview coverage for Live at Leeds 2015, including a list of personal recommendations I was asked to produce within 24 hours of being given the schedule. I could have said no. I could have said I was too tired, too busy, too lazy to get it done. All of those answers would have been easy, right?

But it wouldn’t have felt right for me to say them. When I was in Austin this year, I was surprised and stunned when my friends in high places – the BBC’s Steve Lamacq, in particular – were going around telling all their friends how important I was to the British music scene. Lammo would introduce me as “this is Mary, our best American champion of British music we have…” and I had to stop myself from fainting. It just didn’t seem real. Steve Lamacq, whose own voice I have listened to on the radio for so many years, the person who I’ve counted on for directing me towards so many great bands…this same STEVE LAMACQ is saying these lovely things about me? 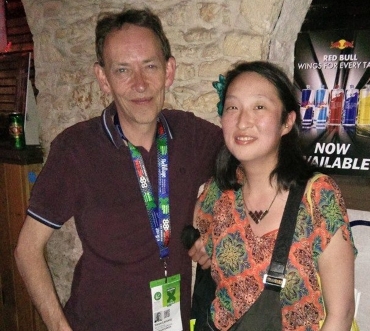 Looking back, maybe I shouldn’t have been so surprised. Maybe this has just been a long time coming and it wasn’t until March 2015 that I would be recognised for all my hard work? That’s how it feels, so I’m sticking with that theory. The praise heaped on me by Steve, Vic Galloway, and Huw Stephens, and by countless others in a band or in PR and management, meant so much to me. It was proof I was no longer that little girl from the suburbs who avoided making phone calls or making eye contact with other people because she was too shy, nor the awkward teenager with low self-esteem who assumed her whole life after university was going to spent in front of a lonely laboratory bench and that was all there was to life.

My time in Austin and the amazing experiences I had there renewed my faith in what I’ve been doing for the last 6 years and my commitment to what I do with TGTF. My singing and musician days of my childhood are in the past now of course but fuelled by this recent encouragement, I’m really looking forward to the next phase of my writing career, wherever it takes me.

In particular, the insightful conversations I had at SXSW with three up-and-coming electronic artists – Will Doyle (East India Youth), Gunsal Moreno (beGun), and Ryan L. West (Rival Consoles) – have given me more motivation to ratchet up my support of electronic music. Women are criminally underrepresented in the genre, which may explain partially but not completely why most electronic shows of the less pop variety are attended by mostly men. I haven’t figured yet what I’m going to do yet, but I want and have to think of something. Watch this space…

But here is the real purpose of this post. I wanted to write to you all, as although I will contribute further song interpretation and analyses in the near future, I anticipate my time to do so to be limited in the next 2 months because of a new commitment. I have signed on to a very involved writing project for my new German friend Hendrik Jasnoch’s Web site One Week // One Band. I was “introduced” to him and his Tumblr site’s premise last year when I was asked by a fan to answer a series of questions about my role in the media and as a long-time supporter of Sheffield band The Crookes, whose Daniel Hopewell some of you may know was the first champion of Music in Notes.

You’re probably wondering why I agreed to take another – and major – writing project when I barely have the free time, never mind the sanity, to do both TGTF and MiN on top of my normal waking Real Life. Well, the quick answer is relatively simple and three-fold:

1. I didn’t think a detailed analysis of this particular band made sense here on MiN. Judging from the questioning looks I get from friends’ faces and the derision (from mocking to serious) I get when I tell them I’m a massive fan of this band, I take it that it might not go all that well here,

2. Based on #1 above, I wanted to pose the challenge to myself to prove to everyone reading when it’s my turn on Hendrik’s site that this band was worthy of all the accolades I have showered them with, and

3. I wanted a way to thank them (even if it was done virtually) for what they’ve given to me. I had hoped to be able to personally thank them, but an interview with their primary songwriter that had been promised to me as editor of TGTF a couple years ago sadly fell through. This is my chance to do some long-awaited thanking that is far overdue. When the time comes, I’ll direct you all to that week of writing and I hope you’ll have a read.

Until next time, stay sweet.

2 thoughts on “Update: “I wanted words…but all I heard was nothing.” Apologies!”

Find out more or adjust your settings.