NB: This is part 2 of my song analysis of ‘Proposition’ from Duran Duran’s fourth album ‘Notorious’, released in 1986. I’ve decided to post this now, 2 days before the band perform at the Kennedy Space Center Tuesday night, 16 July 2019 (previewed on TGTF through here), as part of the festivities celebrating the 50th anniversary of the Apollo 11 moon landing. I recommend reading part 1 through here before diving into part 2 below.

Verse 1
“Bring back that child,” she said.
“Spare me the price of freedom.
Cold is my baby’s head,
blown by the wind of reason.
Even the rage behind
cries out to see
we’re still standing
under the closing edge,
pay for the crime of feeling.”

Prechorus 1
When all your pride is dead,
you must be scared instead.

Chorus
A quiet word is my proposition,
a promise made of a fierce day.
A body bleeds for this coalition,
without surrender if you stay.

Verse 2
“Show me my youth,” she cried,
wasted for desolation.
Hold up the sacrifice,
pull down your institution.
Resting while anger flies,
question’s the same.
who’s deciding?
After the clouds have lain,
shame on your generation.”

Prechorus 2
When all your guilt lies dead,
you must be scared instead.

Chorus
A quiet word is my proposition,
a promise made of a fierce day.
A body bleeds for this coalition,
without surrender if you stay.

Prechorus 3
When all your pain lies dead,
you must be scared instead.

Chorus 2X
A quiet word is my proposition,
a promise made of a fierce day.
A body bleeds for this coalition,
without surrender if you stay.

Quite simply at the time when they hit it big in the early ‘80s, there wasn’t another band like Duran Duran. They were the complete package: they were five gorgeous, trend-setting English boys whose music was neither punk, pop, or funk. Simon’s job was to provide the words that would overlay the sonic landscapes that the four others had already come up with in the studio. I’ve always been amazed by writers who do this, as it isn’t easy trying to fit lyrics onto an already established melody. It requires you to massage syllables, either by cutting them or adding more, so they’ll fit what you’ve been given. If you have ever written poetry to fit a certain meter, you know what I’m talking about. When I write poems, I like a formal structure, such as successive iambs arranged in couplets, because then you are assured that the final result will be nice and neat. That doesn’t necessarily happen in the world of pop music. 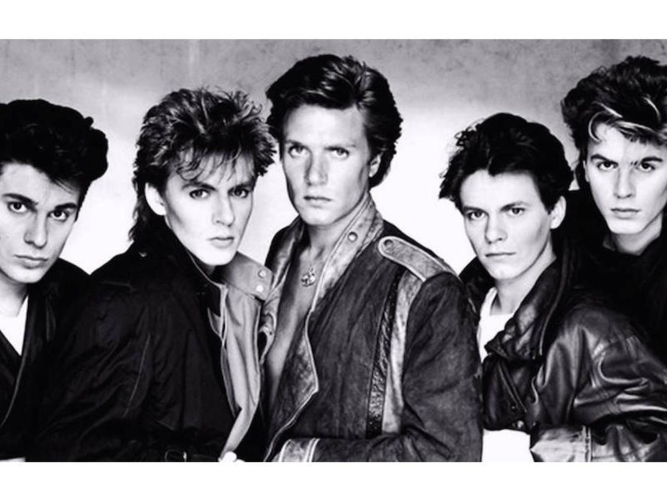 Further, lyrics in songs are most often telling a story, either complementing the story already told through the music or coming in fresh with a story because there isn’t one in the music just yet. In the early days of Duran Duran, there was a lot of color and flavor from Andy Taylor’s guitar lines and bursts and John Taylor’s bass lines. Still, it fell on Simon to write words that would connect the songs with their audience. For sure, his lyrics over the years have garnered more than a few head scratches. Let’s revisit some of his gems from 1980-1986, some possibly familiar, some not so much:

Don’t say you’re easy on me, you’re about as easy as a nuclear war. (‘Is There Something I Should Know?’)

Funny, it’s just like a scene out of Voltaire, twisting out of sight. (‘Last Chance on a Stairway’)

And if the fires burn out, there’s only fire to blame. (‘Hold Back the Rain’)

I’m on a ride and I wanna get off, but they won’t slow down the roundabout. (‘The Reflex’)

Show me your secret and tell me your name, catch me with your fizzy smile. (‘I Take the Dice’)

Would someone please explain the reason for this strange behavior? (‘Skin Trade’)

Use your lipstick line, to color fear and loathing with a pink disguise. (‘Meet El Presidente’)

Simon was one of the first lyricists I had encountered who taught me it was okay to be oblique with the words you chose.

A few days ago, I queued ‘Proposition’ on Spotify during work, listening intently to the words for the first time in years. Of course I knew all the words. It was my favorite on ‘Notorious,’ and I had sung along to the lyrics so many times before. I even remembered where in the song to air synth Nick’s chord progressions. I can hear them and see him play them in my mind. Then I came to a terrible realization and wanted to punch myself repeatedly following an ‘aha!’ moment. What on earth? How did I miss this deeper meaning before? It seems so obvious to me now, but there was no way when I was a naive girl raised in a middle class suburb that I would have seen it. Now that I can see what’s inside, the song is more beautiful to me than ever before.

Before a single word is spoken, ‘Proposition’ begins with a series of aggressive keyboard chords, brass notes, and guitar tones. The introduction is a fanfare for the serious nature of what’s come. It seems perfect for the song’s title. I mean, what does the word ‘proposition’ conjure up in your head? For me, it makes me think of business arrangements, often unsavory ones, and putting yourself in situations you’re trying to get out of.

Years ago, I thought verse 1 was describing a woman in the war-torn Eastern Bloc and the difficulties of raising a child in that environment. “Bring back that child,” she said. / “Spare me the price of freedom”: those are the words of a woman who has made a painful decision to keep her child despite the cost of raising said child in a dangerous place. The epiphany I had last week about ‘Proposition’ is this. It’s not about that rough-faced mother in behind the Berlin Wall at all. It’s about the fight for a child who was either going to be given up for adoption or may have been lost in an abortion.

A woman has just given up the baby she just gave birth to and is now having second thoughts about giving the child away. “Cold is my baby’s head / blown by the wind of reason”: the baby is being given up for adoption for “the reason” presumably that the young mother cannot reasonably take care of it. It’s unclear whose rage is noted: is it the rage of her own parents about the child being born out of wedlock, or of the mother being forced to give up her own child? Regardless of who’s rage it is, “we’re still standing / under the closing edge / pay for the crime of feeling.” The “crime of feeling”, doesn’t that get you right in the gut? A ‘close’, the conclusion of a prior agreement, is about to occur, and the feels are gut-wrenching.

Then we go into one of three prechoruses of the song, each of them structured similarly, but there’s one major difference in the first half of each. In prechorus 1, the lyrics are “When all your pride is dead, / you must be scared instead.” Let us go over the other two, as to illustrate the importance of word choice. Prechorus 2 stars, “When all your guilt lies dead.” Prechorus 3 starts, “When all your pain lies dead.” Pride, guilt, pain, these are all clearly terrible emotions. We’ll come back to these, as well as the chorus.

Verse 2 gives more credence to the idea of adoption and abortion. The young mother lost her childlike innocence when she became pregnant. “Show me my youth,” she cried, “wasted for desolation”: her youth is gone but now without her child, she is left desolate. Desolate is an interesting choice to describe a woman, too. When I think of a desolate landscape, I think of a barren desert. Did the young woman have complications during her pregnancy that have left her unable to have any more children? That would make the pain of separation from her child and the forced adoption that much more painful. “Who’s deciding? After the clouds have lain / shame on your generation”: this is an indictment of the woman’s parents and of the decision to put the child up for adoption was out of her hands and made without her consultation.

Let’s now tackle the chorus:
A quiet word is my proposition,
a promise made of a fierce day.
A body bleeds for this coalition,
without surrender if you stay.

“A quiet word is my proposition” and “Without surrender if you stay”: is it possible that the young woman resigned herself to staying in a loveless relationship with the baby’s father in order to keep the baby and prevent the adoption? In political parlance, a coalition is an alliance. If “a body bleeds for this coalition,” meaning her body, does that mean that her heart was bleeding that she was placed in this awful position? Or is it literal, as in she would be bleeding and lose the baby if she was forced to have an abortion?

I want to revisit those three emotions in the prechoruses: pride, guilt, and pain. Regardless of the outcome for the woman, the prechoruses ensure a clear message: once you lie down and resign yourself to what has happened, e.g., “When all your pain lies dead,” that means you are no longer feeling anything. You are numb. You are dead inside. But why? Simon thinks, “you must be scared instead.” Too scared to admit the pride, guilt, and pain of this heart-wrenching situation. You’ve given up. I don’t think the word choice of ‘dead’ is a coincidence, lending further credence to the possible connection to abortion.

It might be a stretch to connect the two, but given the tumultuous time in Duran Duran with Andy and Roger leaving, I’m wondering if this song was an allegory written by Simon to reflect the desire to keep everyone together. He (and John and Nick?) cared too much and was holding on the emotional baggage, yet he knew, ultimately, that they were never going to keep Duran Duran the five-piece together.

Duran Duran were bleeding but when they came out of the other side of ‘Notorious’, they’d birthed a new lineup, and a fresh new era. Like the face of ‘Proposition’, the young woman who had given up her child, she had plenty of fight left in her. So did Duran Duran. And a global nation of Duranies is grateful.

Sadly, no video for this perfect song, so you’ll have to make do with a stream. Don’t let that stop you from discovering (or rediscovering) this ’80s gem.